Q. How do I read a call number? 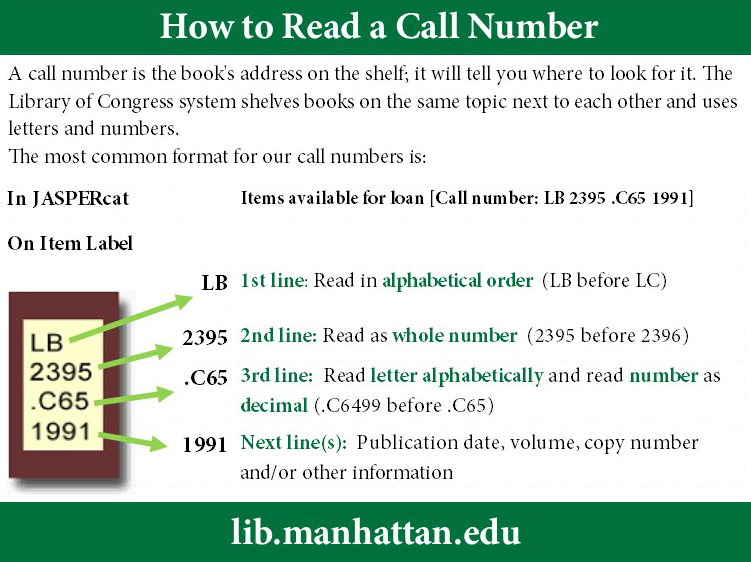 Once you have found the book in JasperCat that you want to take out, you need to read the call number to figure out where it is in the library. We'll use this one as an example, Call number: PR4622.H6 1994

Read the call number from left to right, and know that when it moves from letters to numbers, it is moving to a different way of sequencing.

PR4622.H6 1994 - The second set of numbers before the decimal point are read as whole numbers, so 46 is before 47 and 4622 (this book) is well after both of them. So you would look for the markers on the top of the shelving units and head to the section that contains items in the 4000s range that would include the number 4622

PR4622.H6 1994 Then you go in alphabetical order for the sequence after the decimal point after you find books marked as PR4622 to get to ones that begin with the letter H after the decimal.

PR4622.H6 1994 The last number is the year that the book was published, so this will mostly enter into the equation if you are looking to make sure you have the most recent edition of a book with multiple edition just by looking at the two books side by side on the shelf.

Books that just start with the number and have no letters at the front are the Dewey books and are located in the Dewey collection on sub floors 1A and 1B.

If you have any problems finding a book feel free to ask at the reference desk or circulation for help finding it.